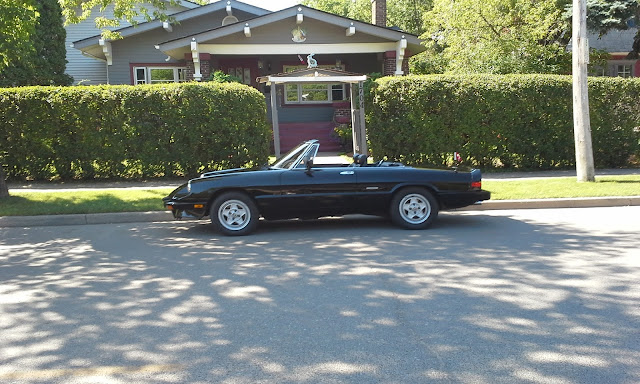 The Alfa belongs to my old friend Dave Inglis, formerly of Grosvenor Avenue and for the past few decades, of Brandon, Manitoba.
"Best Alfa moment: we bought the Alfa from friends and had to fly out to Kelowna, BC to pick it up. They had owned the car for 5 or 6 years. When we arrived at the airport in Kelowna, Royden had it parked right outside the airport's front doors. She was gleaming and all set for the drive to Manitoba the next day. I got the wheel first. It was a beautiful sunny, warm day as we started out, the sun and warm wind engulfing us in the open convertible. Somewhere around Banff, Alberta I rounded a curve that opened to a long straightaway. In the distance I saw a pack of two Porsches and a BMW roadster approaching I will never forget the sound as they passed....voom, voom, voom. As they passed all three drivers turned their heads to look at our 1986 Alfa Romeo Spider Veloce. We also would have created that 'voom' passing them.  I always imagine they were thinking, 'What was that?
"Worst Alfa moment: we were driving TransCanada Highway Number 1 from Brandon, Manitoba to Saskatoon, Saskatchewan via Regina, Sask. for a long weekend [4 hours to Regina heading West then 3 hours North, Regina to Saskatoon]. Laurie was driving.  was enjoying the hum of the car and watching the scenery. Suddenly, my head flew back and I experienced a throbbing pain in and was covered in liquid. It was as though someone has taken me out from behind the grassy knoll. Turns out I was taken out by a grasshopper while we were doing about 120 km/h.  I sported a welt on my head and was covered in grasshopper guts. The spray of guts was everywhere. It reminded me of that old joke.
Q: “What was the last thing that goes through a grasshopper's mind when he hits your windshield? 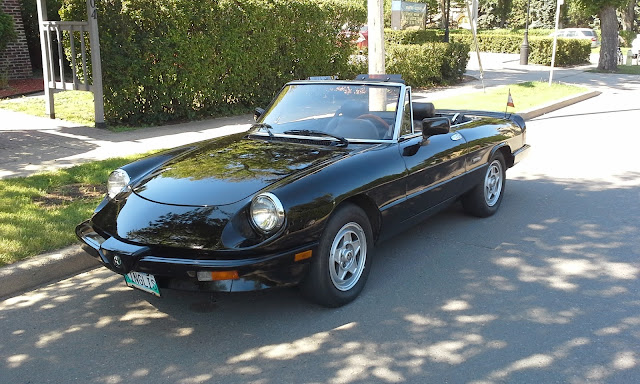 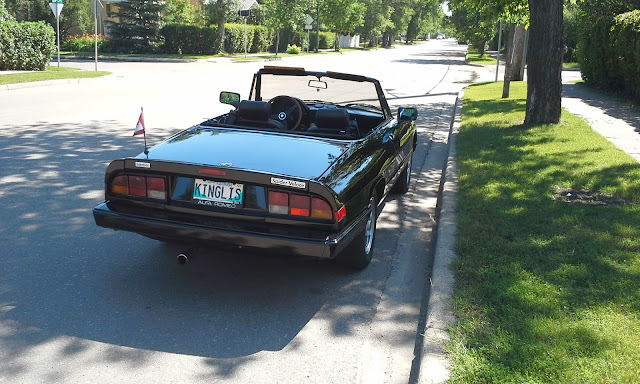 Posted by autoliterate at 5:00 AM