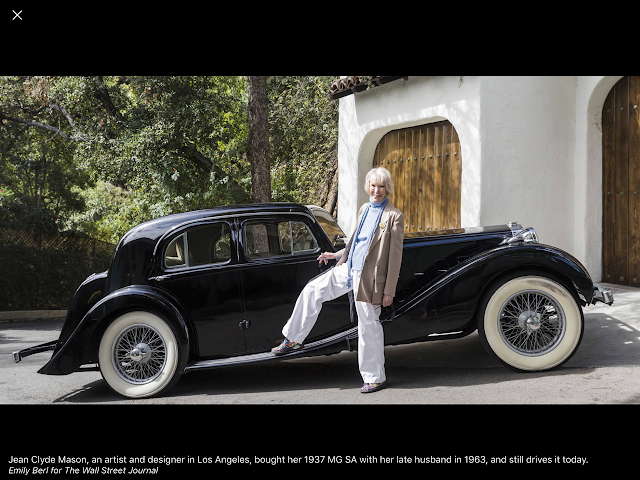 Thanks to Stephen Hendrickson for the heads-up on AJ Baime's piece in The Wall Street Journal on this MG SA:
Jean Clyde Mason, 84, an artist and designer from Los Angeles, on her 1937 MG SA, as told to A.J. Baime in the WSJ.
"My late husband Spencer and I always loved cars. Soon after we married in 1955, we were on a game show called “You Bet Your Life,” and Groucho Marx asked the questions. We won some money and bought our first car: a three-wheeled Morgan. Soon after, we bought a used Jaguar and while I loved the look of it, I always joked that it was like being in love with an actor. It never worked.
"Around 1960 we were watching the 1940 film “ Rebecca, ” starring Laurence Olivier, when we saw this British car move across the screen. It was a 1937 MG SA. We both thought: That is a beautiful car. Soon after, my husband saw an ad for one for sale in England. The British pound was weak at the time, so he bought it for very cheap..."

Posted by autoliterate at 6:30 AM