Wallace Stegner, The National Post, and the Cross-Canada Road Trip

“Home is a notion that only nations of the homeless fully appreciate and only the uprooted comprehend.”
― Wallace Stegner, Angle of Repose
While I was a Stegner Fellow at Stanford I was lucky enough to meet the novelist and environmentalist Wallace Stegner, then in his eighties and an impressive man. Wally had just spent the morning cutting firewood. My introduction to his work was "Wolf Willow", the memoir of a boyhood spent in southern Saskatchewan. WS named the town where it was set Whitemud, but it is really Eastend, Sask.
Several years back, I drove across Canada and kept a trip log for the National Post. It was published in NP under the title, "Going the Distance" and I'm posting it, below.
On that trip I slept in my car most nights, so I could wake up in the middle of nowhere. One morning, a few miles west of nowhere, I found Jack's Cafe in Stegner's town of Eastend, Saskatchewan. A few half-tons, outside, and a few ranchers inside, and the best diner food I've ever experienced. Everything fresh. They smoked their own bacon. It seems like a dream to me now...but Alex Emond took a photo last year, so Jack's still does exist. Next time you happen to be driving across the high lonesome, time it for a breakfast stop for Eastend. And bring along your copy of Wolf Willow.
In the meantime, here's my piece--''Going the Distance"--from National Post. I do not understand why the text is posting in various fonts and sizes. It is annoying and distracting, I realize, but I can't seem to do anything about it. Apologies.

GOING THE DISTANCE
I was a restless child. When I realized that all roads in North America were connected, and that going anywhere--anywhere!-- was just a matter of taking the correct sequence of turns, I wanted to step on the gas immediately.
I developed an obsession with maps, & drove across the country for the first time when I was eighteen. I've made the trip twenty times since. Now I'm piloting that indestructible symbol of middle-age, a Volvo station wagon. Flying coast-to-coast still seems like a waste of a perfectly good continent.

My wife likes highways but prefers frequent-flyer miles. I grew up in Montreal, live in Southern California. I'm headed home after a stay at the Fine Arts Work Center in Provincetown, Massachusetts, where I’ve been working on a novel about a boy coming out of Famine Ireland in the 1840s. It is late October and I’m invited to spend the weekend with friends at Tadoussac, Quebec. I have not been north around Lake Superior in a decade. And I miss the austere light of Saskatchewan in autumn. So I've decided to drive home across Canada.
...
The plan is to aim for the Queen Charlotte Islands. I can see the trip really ending there. Can't go further west in Canada. Then I'll head for California I've left it kind of late in the season, though. Anxious about snow in the mountains.
...
Driving up and down the St John Valley on the Maine side, peering across the river at Canada. Small, rough hills spattered with autumn color. I feel reluctant to cross. Like a stranger standing on the porch of the house where he grew up, wary of touching the doorbell. This is disconcerting. I have never felt American. If I don't feel like I'm coming home here, crossing this border, I'm never going to.
French Canadian names--Martin, Lavoie, Plourde--on all mailboxes along the last few miles of US 1. The kid at the Gulf station says the local dialect is Valley French. Across the river, "they speak more Parisian."
...
Past L'Universite de Maine á Fort-Kent I get caught in Saturday-evening-Mass traffic outside Eglise St-Louis, then finally cross the river at Edmundston. The officer at Canada Customs says Rosette's in Frenchville, Maine is the best place to eat.
...
Rosette’s is packed with families, mémère, pépère, toute la gang chowing down on broiled scallops, chowder, steaks, blueberry pie. Everyone talks fast and twangy. Sentences that start French and end English, or the other way around.

...
I'm of the Trudeaumania generation.
"If you want to see me again, don't bring signs saying 'Trudeau
is a pig', and don't bring signs that 'Trudeau hustles women'
because
I won't talk to you.
I didn't get into politics to be insulted.
And don't throw wheat at me, either.
If you don't stop that,
I'll kick you right in the ass."
[PET to a young protester throwing wheat at him during a speech in Regina, (17 July 1969)]
Pierre instructed us to get out there and see our country. Geography was patriotism. Maybe you remember those long lines of blackfly-baiting hitchhikers stranded out along the Trans-Canada Highway on any summer night, 1967-76?

...
Sunday morning grey skies in Québec exaggerate a sense of northern bleakness. Post-Catholic countryside sports bar salons and plastic road-signs advertising danseuses, sometimes nu. The ferry from Rivière-du-Loup takes an hour and a half to cross the St. Lawrence, which is tidal and smells of the sea.
Tadoussac must come close to a European fantasy of Canada. Busloads of francais de France have day-tripped down from Quebec City. Tiny wooden town, rough Laurentian hills, birch trees pulsing  yellow.
The sky over the estuary is stuffed with sunlight, the light of wide  horizons.
Tadoussac has a population of eight hundred or so, and twenty-eight listings in the phone book under Hovington, all with francophone first names. The forebear was a British sailor. Sixty more Hovingtons are listed in Sacre-Coeur, the next village. My friend says all the Hovingtons he knows insist they are unrelated to any others.
The Europeans come to see les baleines puis les autochtones. Whales and Indians. Beluga are scarce this week, but here's one. 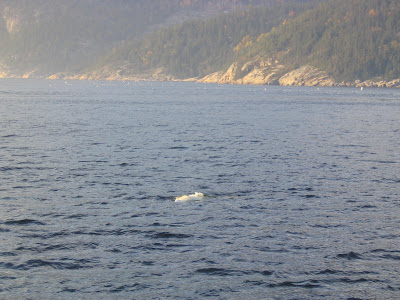 Les autochtones are scarcer. Or don't wish to perform for the Europeans. When the busloads arrive at the Cafe du Fjord, Québecois staff fake it with buckskins and face-paint.
...
Silver Mercedes Benz, parked beside a farm stand at the eastern tip of Ile d'Orleans. Cold wind blowing across fallow. Smell of black earth, apples. The Japanese couple, wearing Barbour waxed jackets, speak fractured English. The farm woman with the jolly red cheeks replies, in French, that, regretfully, she doesn't speak the language.
Maybe her French sounds English to the Japanese, not fluent themselves, because they repeat in English, only louder.
I catch the drift. They want to know if the maple  syrup is local. She looks offended when I translate.
"Bien sur monsieur, bien sur!" Stamping rubber boots, she gestures at a stand of sugar maples across the road. Smiles  all around. The Japanese purchase six liters of maple syrup, two sacks of apples, and a box of maple sugar candy for two little girls waiting patiently in the Mercedes.
...
I was often bored when I was a kid, so I loved the road's promise of freedom, speed, engagement. Now my life is more hectic. What I like most about driving now is solitude, long blank space, time to think.
...
It grates to hear the St Lawrence Valley and the region along the lakes called "the Windsor-Québec Corridor". It is, after all, a piece of country, not a hallway.
Leaving Montréal for Toronto, I stop at Lachine to walk around the old fur trade depot, thinking of brigades of canoes forming up here each spring and paddling for Rupert's Land.  It's already dark by Cornwall, and I give up on back roads, sign onto the 401.
Freeways hammer gnarled mysterious country into scenery, passive and boring. I feel like a FedEx package. So I bail out of the 401 at Port Hope, Ontario. Time to slow down. 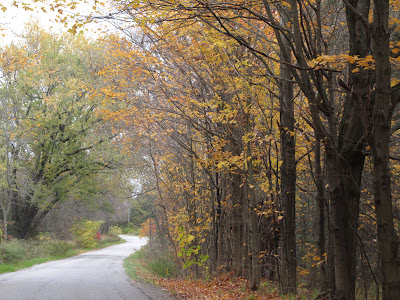 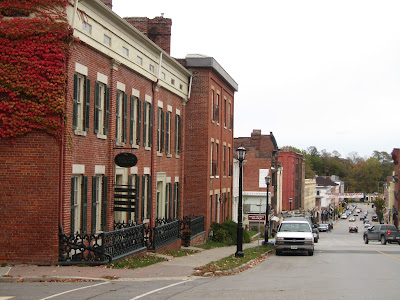 Then it's  Toronto the urbane forest. 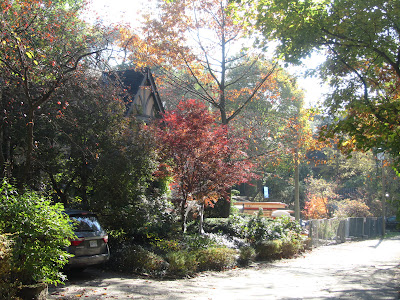 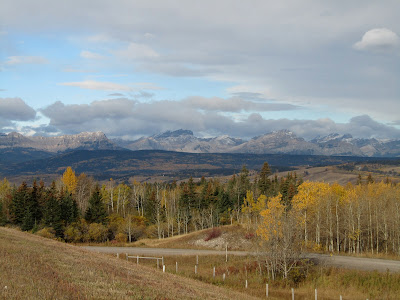 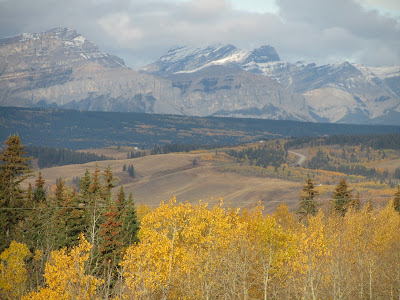 Snow in the Bow Valley. Canadians like to scorn Banff town. It's not pure enough. Maybe they want to imagine Trapper Nelson running a trading post on Banff Avenue, not Ralph Lauren selling ersatz prep-wear to the Japanese. Banff is supposed to be the enabler for Canada's wilderness fantasy, helping the rest of the nation feel better about surrendering to donut shops and malls.
I like the busy streets, mild urban buzz, lack of sprawl, disrespectful elk. 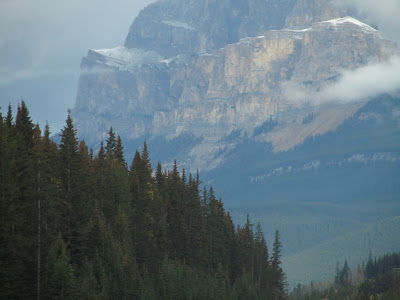 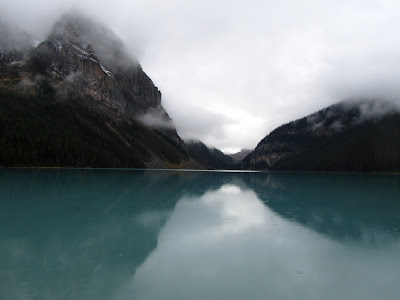 Approaching Banff, a rush of memories of our old days--hippie days--in Banff.  One thing the members of that brilliant tribe had in common was passionate love of our mountains and rivers.
Snow coming down hard on the Jasper highway. The road is solid white. Suddenly it's crazy to even think of going up over Bow Summit.  I stop the car, get out. No one else on the road. Flakes the size of golf balls. When it's snowing this hard, air in the mountains smells of cold  smoke. 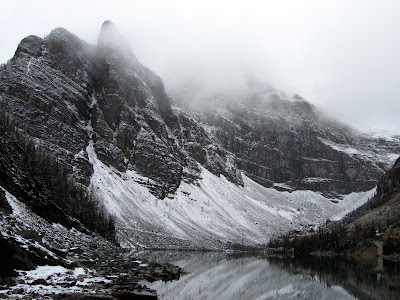 ...
Plans for the Queen Charlottes are falling through, on account of winter weather in the mountains and awkward off-season ferry schedules.
I wake up on my third day in Banff and can't see through snow to my car. Decide all of a sudden that I'm heading south.
...
On the southwestern side of the Rockies, the season has downshifted back to autumn. Cranbrook, BC gets my vote as ugliest town in Canada. Beautiful country along the Moyie River, though. The border coming up fast. I’m hoarding Canadian quarters for LA parking meters where they work just fine. [[which made sense in the days when the CDN$ was worth 80 cents US; but the last time, I checked the loony was at US$1.02--pb]] 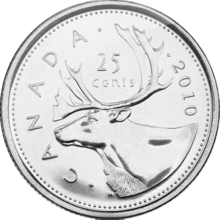 I'm eager to get to California, sad to leave just when my accent has sharpened back to Canadian. A country can be like your family--you feel restless as hell growing up in the middle of it but when it's gone, or you're gone, it radiates a strange power.
Judy's River Bend Cafe, beside the tire-repair shop in Yahk, BC, gets my votes for best homemade borscht and best apple pie. I ask Judy if borscht means she is Doukhabor.
"Nope."
Back in the car. Pay attention to the country. Black clouds breaking up over the elegant Purcell Range. Bursts of sunshine, mild wind from the West Coast. Two kilometers from the Idaho border, one black moose swaggering across the road. 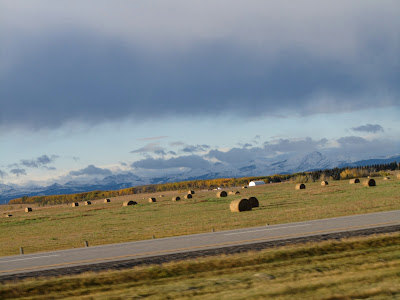 Posted by autoliterate at 1:29 AM