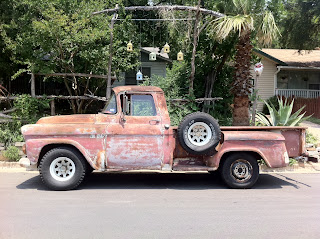 Our man in Austin, Bill Geisler caught this Task Force Series truck on a perambulation through his neighborhood. It looks like a work-in-progress, though I think the paint is just about where it should be. Perhaps it could be clear-coated to preserve that weathered patina. I like the sun-flayed, textured look of paint that's spent some years in the sun. Nothing wrong with a little surface rust, either. I don't know the T-F series well, but this is a late-1955 to 1959 Chevrolet or GMC, with what looks like an eight-foot stepside bed. Tires and wheels are a bit mismatched, even size-wise, but maybe that's the next upgrade in-progress. 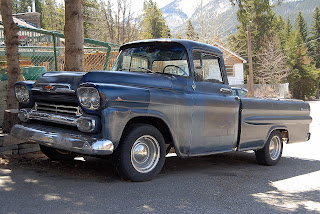 And here's another Austin series from Bill. The quad headlights mean this is a 1958 or 59. The fleetside bed was new in '58. I'm sounding a little truck-geeky, but what the heck. You can learn a lot more about these machines here. 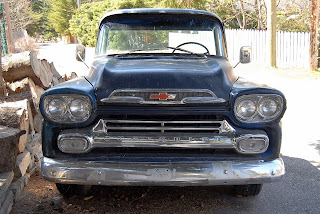 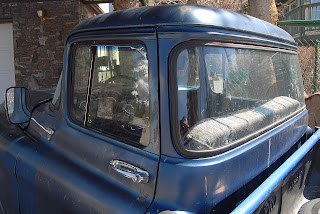 Posted by autoliterate at 9:47 AM