The Absent Hand: Reimagining Our American Landscape by Suzannah Lessard 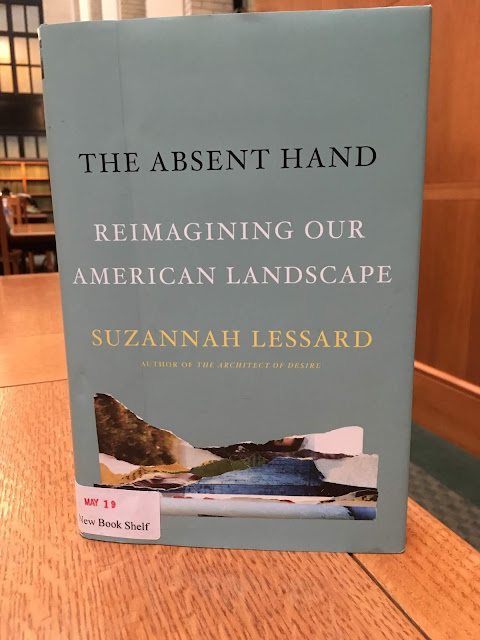 The book is a perceptive and unsentimental look at the way we live upon the American land. Lessard might have borrowed a title from Anthony Trollope and called her book, "The Way We Live Now". The Absent Hand is by no means a narrow polemic. Lessard has lucid, painful things to say about blind spots in "progressive" thinking and feeling. The book is revelatory in the connections posed between the development of nuclear weapons, the strategies of the Cold War, the space race, the internet age and the way live upon and understand-or don't--the landscape of now. History makes geography. Unlike some environmentalists with keyboards, and polemics, Lessard's tone isn't hectoring or scolding. Nor is she grinding the narrow blade of a political axe. Bored by the blind spots in wilderness romanticism and pastoral nostalgia--from the left or right-- she does look closely at the historical forces that since the end of WWII have produced the American landscape that is all around us and that we have, somehow, not quite learned to see.


--Autoliterate
p19 "The idea that country is good and suburbia bad...is a structure of feeling deep set in the progressive mind of our times."

p21 "...the mystery of suburbophobia...We were in one of the most fashionable parts of the Berkshires, pastoral though it appeared to be...Didn't they realize the countryside they lived in was really a kind of picturesque park, an amenity, a redoubt of privilege?"

p72 The contemporary experience of air travel offers "an environment that is like nothing so much as throwaway packaging, but with a godlike perspective."

p152 "Very quickly the idea that market values could provide the best answer to all problems--poverty, how to run a university, what art is good--became not just a refreshing alternative approach, but the only approach that made sense."

The Absent Hand: Reimagining Our American Landscape by Suzannah Lessard, at Amazon.

Michael Kimmelman's review in The New York Times. Lessard's previous book was The Architect of Desire: Beauty and Danger in the Stanford White Family.

Posted by autoliterate at 4:08 PM