Autoliterate likes station wagons nearly as much as trucks, and plans a posting on a hardy pair of Volvo 850 wagons, the daily drivers here. There's something reassuring about a vehicle you can sleep in.
Meanwhile, a station wagon piece from one of our Northern California correspondents. As a car-crazed young man, Michael Taylor was authorized to choose the family wheels. It had to be a station wagon, but that was about the only constraint.  Michael went at it with all the joie de vivre of the defense department ordering a new weapons system. 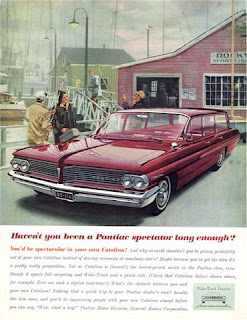 PONTIAC SAFARI
For a budding car freak, just out of his teens, the offer was irresistible. It was 1962, and my dad said he needed a new station wagon – uh huh, fine, there are a lot of them out there – but the wrinkle was that he was leaving it completely up to me as to which car to buy. He told me to figure out everything about the car. He didn’t care about the color (please, no orange, he did say), or what engine was in it (gas was 31 cents a gallon back then) or, for that matter, anything else about the car. Just make it a wagon. There was only one caveat: for complicated business reasons, it had to be a General Motors car and it had to be picked up, by me, at a GM facility in Detroit. Other than that, have at it, kid. So…. what to do?

We were living in New York then, so I slunk down to the Manhattan Pontiac dealer that, if memory serves, was on the corner of 57th Street and Broadway. Into the showroom, all eager, bright-eyed, quick glance at the range of 1962 Pontiacs – how about that Bonneville convertible? I wonder if that qualifies as a wagon – then over to the first salesman. “Hi,” said I, in that tone of the know-it-all whelp who needs taking down a peg or two, “I’d like to see the RPO book.” Somewhere I had read about the Regular Production Option catalogue for GM cars that let you build a car exactly the way you wanted it. Lucky for me that the salesman was a Car Guy. He hauled out a massive binder, put it on the desk and gazed at me.
“You know, we have plenty of cars here,” he said, pointing out that it takes weeks to get a car built from scratch. “You can drive out of this place today. What are you looking for?”
“A wagon,” said I, “but not an ordinary wagon. What I really want to do is build something of a Q-ship. Mild on the outside, wild on the inside.” We talked that way in those days, especially at the age of 20 and horny as hell.
He took one last look at me – I really could sell this kid one of the wagons we’ve got here – and then he realized that I was drooling, and one of those plain-vanilla wagons just wouldn’t do. So he opened the book and started flipping through the sections, arriving at the engine part.
“Okay, what we have here is the basic 389-cubic-inch motor” – he pointed to a line in the book – “but up here we have two big-deal motors, still 389s.” These were Pontiac’s high-performance motors. One was a 333-horsepower engine, with one four-barrel carb; the other was 348 horses, with three two-barrels. I’d heard of multiple carburetor engines occasionally going out of sync, and said, “how about the 333-horse one?”
“Fine,” he said. “You know that comes with the bigger, dual exhaust system. This thing will move. What you’re looking at is a drag car that hauls groceries.” I think at that point I drooled on his desk.
“Transmission?”
“Three-speed on the column.”
Check.
“Morrokide interior?”
Check.
“Light under the hood?”
Light under the hood? Check.
We ordered it up in blue, with blue interior. I gave him the particulars of how the car was going to be paid for – my father was owed some money by someone who had figured out a way to pay him with a car, rather than cash, which was okay with him. The salesman said, “I’ll call you when it’s almost done. Should take about two months.” 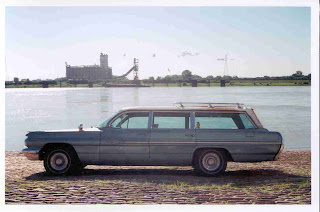 So two months later, he called and said, “car’s going to be ready Tuesday.” On Tuesday, I flew out to Detroit and went to a Pontiac dealer late in the afternoon. Guy took me around back. There it was. Wow. Yes, it was painted blue. Yes, the interior was blue. He started it up. It really did sound like a drag car – no quiet, suburban exhaust here. Burble, burble. He revved it. Whomp, whomp. He gave me the keys, made me sign a bunch of papers – I had no idea what I was signing, just let me into this beast – and told me to take a left out of the parking lot, then a right and another right and that’s the way to New York.
Shifting from first to second, then flooring it – the whole front of the car leaps up, the car squiggles slightly in the rear, then takes off. Like a rocket. Whoah. Easy there.
I drove through the night – too excited to sleep – and every time I stopped for gas, I’d open the hood, check to watch the engine churning throatily away. I got it back to New York in one piece – I’m not sure I was in one piece – and we had the car for another 10 years. Finally, my father decided it was time to get another wagon. This time, it was pretty tame – a 1970 Mercury, automatic, docile engine, quiet exhaust, no light under the hood.
White bread.
©Michael Taylor  2011.
Posted by autoliterate at 3:48 PM